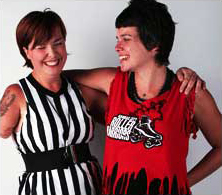 KCRW Co-Founders Dirty Britches (left) & Princess Anna Conda (right)The Kansas City Roller Warriors is the angry mutant love child of skaters Dirty Britches and Princess Anna Conda, formerly known as Brooke Leavitt and Mandy Durham, respectively. The initial idea for the league was born in the spring of 2004 within the quiet confines of the public library where the two women were employed.

Inspired by the Texas Rollergirls website, Leavitt semi-jokingly suggested the idea of forming a Kansas City roller derby league. After a brief discussion the girls decided it was an idea worthy of pursuit.

“At that point we didn’t even realize there were rules,” says Durham. “We just thought these girls were getting all padded up and beating the hell out of each other on skates. It seemed like a pretty great idea. We were kicking ourselves for not thinking of it sooner.”

The presentation of an apparently violent sport within a uniquely theatrical context proved irresistible to both women.

“It was really appealing to me on so many levels,” says Durham. “It was an opportunity to be creative and intensely physical and to build something totally unique from the ground up.”

Leavitt began contacting girls from the Texas league and asking questions about what it would take to get a legitimate league off the ground. She also received quite a bit of guidance and support from Ivanna Spankin of Arizona Roller Derby, which at the time was the only other existing flat track league besides TXRG. Leavitt got the paperwork in order, and by June, Kansas City Roller Warriors, LLC was officially established.

“We started skating in a parking lot in the middle of the summer,” says Leavitt. “There was broken glass and crap all over the place, and we’d just go out there and skate in circles until I thought we were gonna die from heatstroke.”

It was around this time that Durham approached John Hernandez to ask him if he might be interested in coaching. Hernandez knew both women from attending school at the Kansas City Art Institute, and to their pleasant surprise, he accepted.

“It’s not like there was a local roller derby authority,” explains Durham, “so we knew we just needed to find someone with a lot of patience who was really good with people. We got really lucky when John decided to help us.”

The girls put flyers all over the city in hopes of finding other women ready to commit themselves to a life of pain, anguish, and exquisite thigh muscles. New skaters slowly trickled in, and by the fall the league had moved practices to a small community center.

“We basically skated on a small basketball court,” says Leavitt, “In one part of the floor there was this huge lump where there had been some water damage. Also there was a stage in front, so we had girls continually crashing into the front of the stage while we were doing drills. So that was pretty sweet.”

Eventually the league was able to move into Winnwood Skate Center, where practices are now held three times a week. Nearly 80 girls now proudly call themselves part of KCRW. The Roller Warriors held their first official season from January through June of 2005 and packed the house at every game. In February of 2006, KCRW sent an All-Star Travel team to play in the first National Flat-Track Roller Derby Championships in Tucson, Arizona. KCRW placed 6th in the nation out of twenty participating leagues.  In a 10-minute bout on the first day of the tournament, the Roller Warriors faced off against the source of their original inspiration, the mothers of all-female flat track derby- the Texas Rollergirls.

KCRW lost.
By one point.

In the winter of 2007 the Roller Warriors came back with a vengeance and stunned crowds of derby fans as they took 4th at the Western Regional qualifiers. The hard-fought finish earned them a spot at the 2007 Texas Shootout and a chance to take home the WFTDA National Championship trophy. In what was considered to be and already predetermined tournament, KCRW was quickly labeled as the “underdog.” But in a series of head-turning events, the Roller Warriors blew past the New York and North Carolina teams, rightfully securing them a spot in the final battle against Seattle’s Rat City. In the end, the All-Star team emerged victorious with an 89 to 85 win over the highly lauded Rat City girls, in what all derby enthusiasts are calling one of the greatest bouts ever played in the history of the WFTDA league.